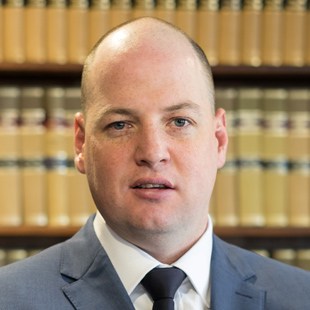 (07) 3236 3853
danielfavell@qldbar.asn.au
(07) 3236 2240
Overview
Daniel has a wide commercial practice and regularly advises on matters in both the State and Commonwealth jurisdictions.

Prior to being called to the Bar, Daniel was a solicitor at Gadens Lawyers where he practised predominantly as a transactional lawyer in the Projects and Infrastructure Team and the Property and Commercial Team. That front end exposure has enabled Daniel to have a greater practical understanding of the issues that are likely to arise in a litigious context.

Recent commercial cases in which Daniel appeared include:

Daniel regularly advises parties with respect to the regulatory regime surrounding pharmacy approvals and has appeared in both the Federal Court and the Administrative Appeals Tribunal on such matters throughout Australia. Cases in which he appeared include:

Daniel also practises in other administrative law areas, both in the Planning & Environment Court and the Queensland Civil and Administrative Tribunal (QCAT). Examples include:

Liability limited by a scheme approved under Professional Standards Legislation